Meet the ‘Searching for the ONE’ Finalists

By: Olivia Hancock
Opinions expressed are solely those of the author


Funkadelic is the only way to describe legendary musician, George Clinton. As the leader of the Parliament-Funkadelic band, Clinton helped to revolutionize what funk music sounded like and has contributed countless edgy hits to pop culture over the past four decades.


His early beginnings trace back to Kannapolis, North Carolina where he was born on July 22, 1941. Clinton later relocated to New Jersey, and it was during the 1950s that he discovered his passion for music. During his time working in a New Jersey barbershop, Clinton put together a group that became known as the Parliaments. The group went on to sign to Revilot Records and churned out their first hit “(I Just Wanna) Testify” in 1967, which landed at #3 on the Billboard R&B charts. The group was forced to rebrand themselves in 1968 as Funkadelic, the name of Clinton’s regular backup band when Revilot Records underwent bankruptcy, and the name the Parliaments was tied up in the record label’s legal battles. 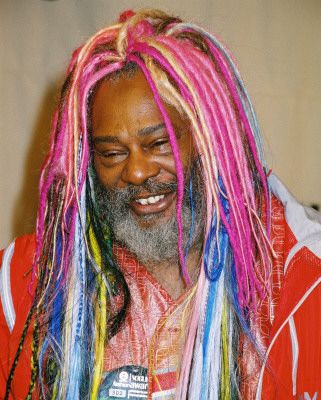 Clinton is referred to as “The Referee” as he has always been the lead vocalist of the group and oversaw the dozens of talent that have contributed to Parliament Funkadelic’s projects over the years. The group--whose members have included Bootsy Collins, Bernie Worrell, Eddie Hazel, and Michael Hampton-- has consistently delivered outlandish, psychedelic tracks. Their catalog of hits includes standout singles like “Flash Light” and “One Nation Under a Groove” and a number of gold and platinum albums.

Clinton has also successfully pursued solo projects. His first album Computer Games was released in 1982 and featured one of his top performing songs “Atomic Dog.” He also released an album in 2004 titled “500,000 Kilowatts of P-Funk Power” and another in 2008 titled “George Clinton and His Gangsters of Love.” Clinton also added author to his resume in 2014 when he published his tell-all autobiography “Brothers Be, Yo Like George, Ain't That Funkin' Kinda Hard on You?”